On Safari In Hluhluwe 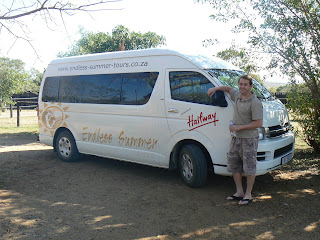 Safari has long days and many rewards. On Thursday we were picked up at 7AM at the Chelsea Villa in Durban by Rhys from Endless Summer Travel Adventures. I found him on Trip Advisor under the recommendation of Anna. We drove for over 2 ½ hours to the town of St. Lucia and arrived at the dock of the St. Lucia estuary just in time for a cruise to see hippos and crocs. It was a two hour boat ride to see our first large African animals. What a thrill it was to go right up to pods of hippos. On the banks we also saw crocodiles laying in the sun waiting to slither into the water for their daily feed. The weather was perfect and our excitement high. 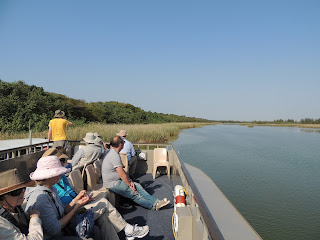 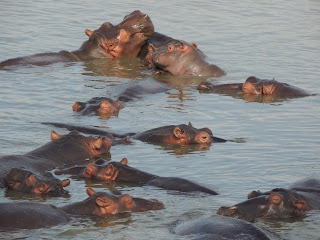 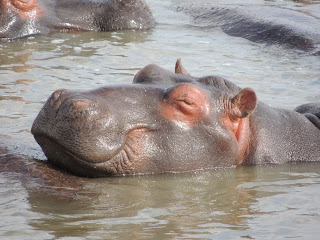 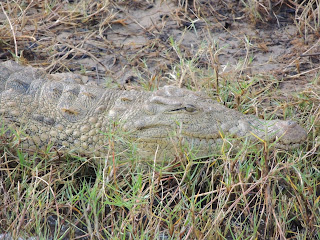 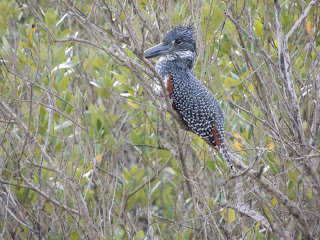 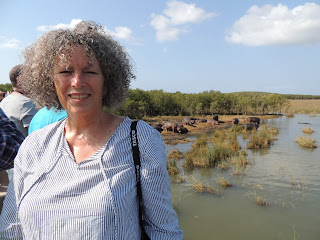 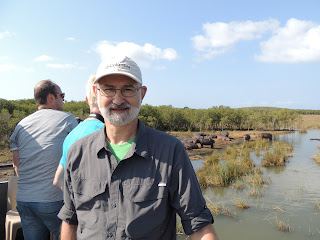 Next Rhys drove us on to Hluhluwe/iMfolozi nature reserve, about a one hour drive. I was sleepy and dosed a bit waking up just as we crossed the border of the park. 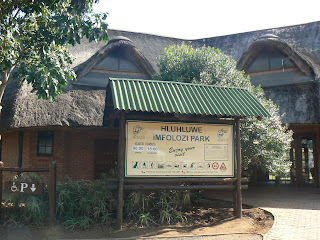 A very short way in and to our left was a magnificent older gentleman in the form of a giraffe! 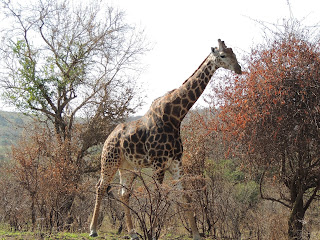 Talk about thrill….it took my breath away and tears came to my eyes. The impact of truly being in Africa with all of its unique beauty and incredible animals that I had never seen in the wild came over me, such a precious gift in my mind. And so, the safari began. Next on the tour leading up to our camp were the impala, then the zebra and many rhinos. We were reminded that we would see many, many impala as they are a staple food source for the carnivores of the bush. A real and chilling fact. 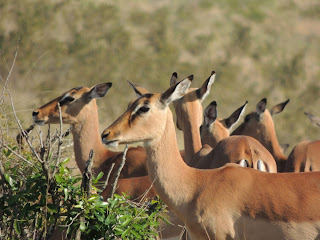 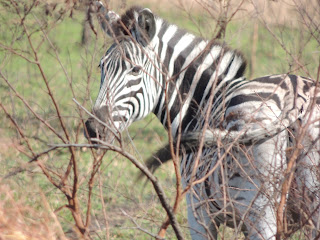 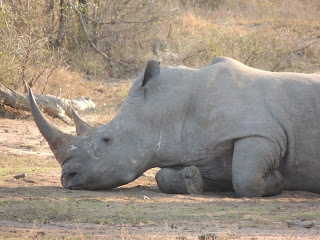 A safari entails driving and driving and driving through the park to find the game. When you come upon an animal it stops you. It feels as if it is a gift just for you. It is why you came, to marvel at their magnificence, and that it is, indeed. By the end of the day we had seen a distant elephant, rhinos, giraffe, impala, nyala, kurdu, buffalo, vervet monkey, chacma baboon, duiker, wildebeest, zebra, wart hog and other birds. We still needed to see a cat of some sort for sure….a lion we hoped. 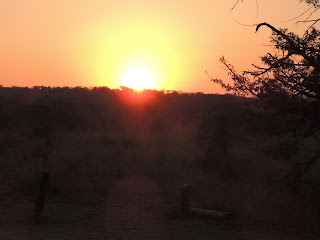 We settled into our chalet over looking the valley for a much needed nap. The gate closed at 6PM and darkness fell for all in the park. When we woke at 7PM Rhys was at the brai cooking our meal under the stars. It was a southern sky that hovered over us. He showed me the southern cross and other constellations. As Rhyes cooked two hyenas came to visit and hoped for a bite or two. We were careful not to leave any morsels to encourage them. On our porch we sat with our South African zin in our glasses and toasted the day. We had a meal of honey soaked thick bacon, lamb chops, sausages, barbeque baked potatoes and squash and a crispy salad. It felt like camping and the outdoors gave the meal its spice of freshness and yummyness that all campers know, and I did not have to lift a finger or a spatula. 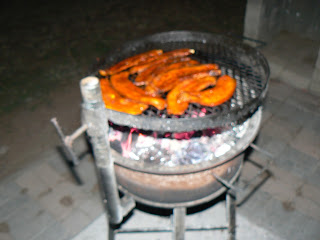 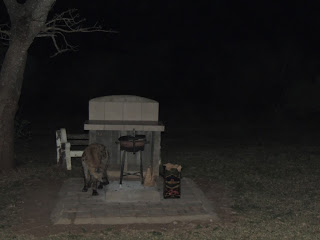 The next day, Friday came early at 5AM when we got up, showered, had coffee and went through the just opened gate at 6AM. 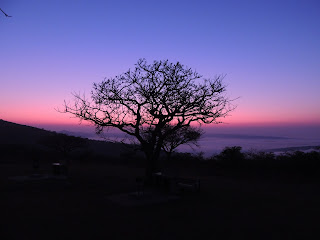 We were hoping to find the lion that we missed the day before. Sometimes early in the morning they can be seen walking the roads. We saw cape buffalo, rhino, zebra, impala, nyala and then elephants. First we saw a mother elephant and baby way in the distance. Rhys was curious that she was all alone. As we drove on and turned down another dirt road we came upon them. There were about 20 elephants on the road right in front of us munching on trees. Breath taking…..amazing…..stunning. So special. But still no lion. 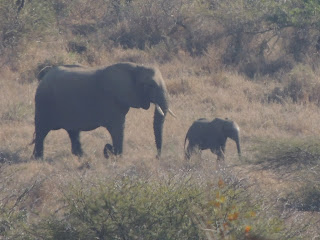 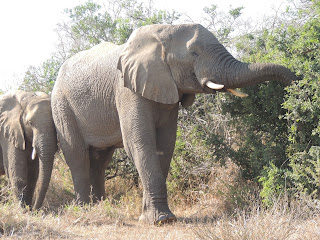 We had to go back to our chalet to pack up and head up to the hilltop for the night. When the deed was done we headed out. Time was marching on and we gave up on an early day find for lions. As we drove past a water hole I did see a lion track....evidence lions did exist in this park. 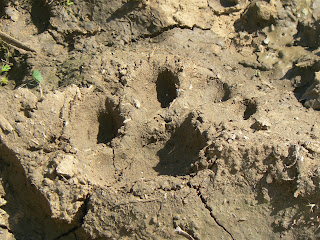 We came to an active bachelor herd of wildebeests who were challenged by a strong male as they entered his territory. The activity of the sexual politics of the African animals was dramatized for our enjoyment. We carried on and as we headed up the road Rhys said, “wait a minute”. He grabbed the binoculars and looking he said, “Lions!”. “Where?” He had seen in the distance something that looked a bit off and he thought it might be a giraffe in the trees. When he looked it was four lions hanging out on the branches of the tree. Well, he earned his pennies. He was quite proud of that saying, “I’ll own that one!” How he ever saw that……it is clear that an experienced guide can make all the difference in a game park. He had an amazing eye for finding the animals. 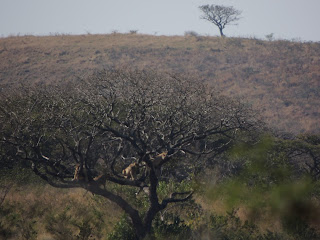 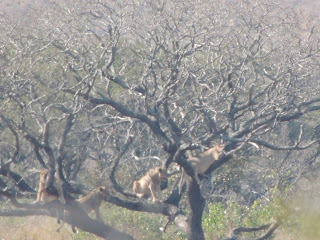 We stayed there quite a while viewing the lions with our binoculars. Again, so special.


By the end of the day we drove for hours and hours interspersed by sightings of these magnificent creatures. 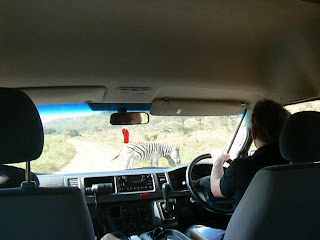 Each sighting was a treat making me feel that this trip was definitely a highlight of my life. One of the best things we have ever done together. So worth it. I have loved this adventure. I am so grateful for every moment I get to be here and witness this beauty. 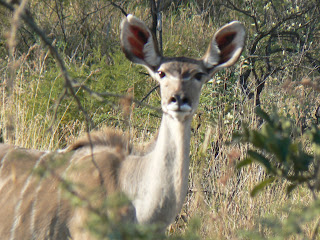 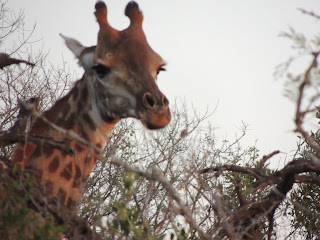 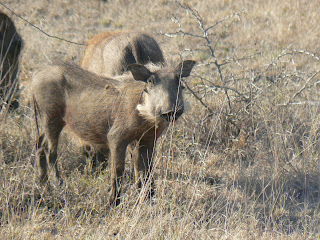 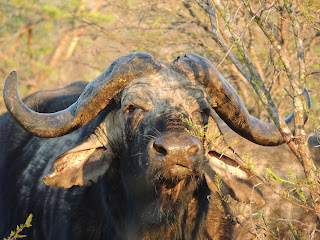 Tonight the wind is up. We hear it in the trees of the Hilltop Lodge. Rhys is at the brai again and cooking our dinner. Wine in hand, feet up, tired from a long day and happy.