The Valley Of The Thousand Hills 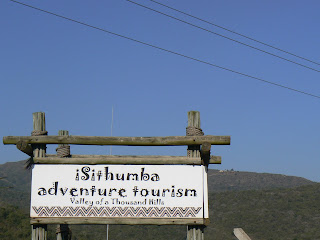 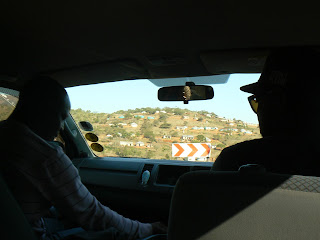 Today we ventured forth on a Street Scene tour of a Zulu village in The Valley of a Thousand Hills.
We traveled with our tour guides outside of Durban into a more rural setting where there are modern traditional villages. This particular village is using the tour industry to create  a business for its people and educating visitors about their way of life. 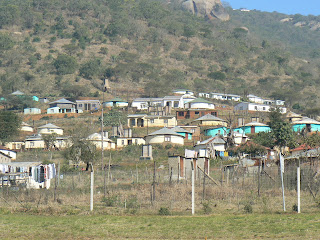 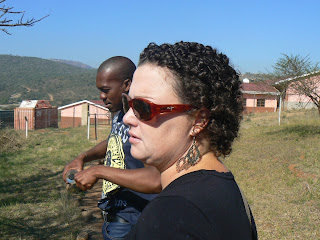 The feeling at this village was very different when I went to the other tribal area and had tea with Mama Kumalo. There was rural beauty and a sense of order and peacefulness. Our guide told us of the old ways of the people from how they got their food through farming and hunting to how they courted each other for marriage. We stood by the river hearing stories of the olden times, "back in the day". As we stood there some frisky goats ran down the road and we enjoyed being out of the city and in the countryside imagining the times when these people lived fully as a part of this land. 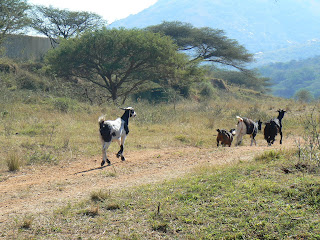 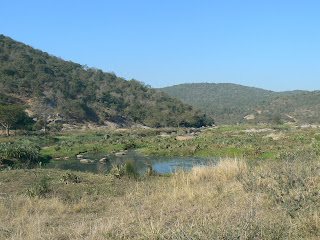 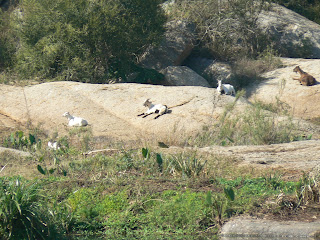 We went to visit the Head Man. He is the leader of the village. There are kings (leaders of the province), then chiefs (leaders of the tribes) and then Head men. They are elected by the people of the village and chosen for their qualities that can best serve the village. Responsibility, knowledge of the traditions, and ability to lead are the important qualities of the one chosen. We went to meet this Head man. As we entered his dwelling we were told that the women are traditionally to sit on the left of the room and the men on the right. There is a practical reason for this order. "Back in the day" when there were tribal wars and there may have been a threat it was easier to hide the women and children behind the door on the left side if there was an attack. The men would grab their shields and spears and run for the door. 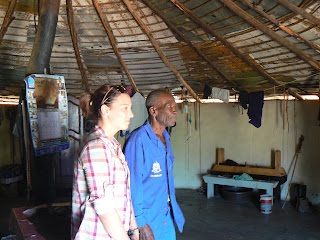 The Head Man of this village with a visitor...

The traditions and rules of the village are still upheld and followed here. If anyone breaks the rules or steals there is a review with the Head man who has the power to punish if necessary with whippings or even banishment from the village. The result is a peaceful and rule abiding community.

We also visited the healer of the village who uses traditional herbs and concoctions for all types of ailments. One becomes a healer after feeling a "calling". The calling can come in the form of a dream or in the form of being depressed about one's life. If you are depressed it may be that the spirit is calling you and you are not following the call. We came upon this man dressed in bright green crushing herbs in is mortar with his large pestle. 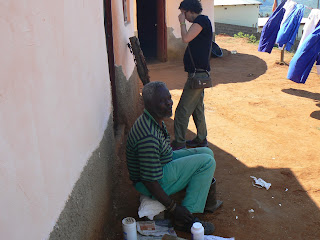 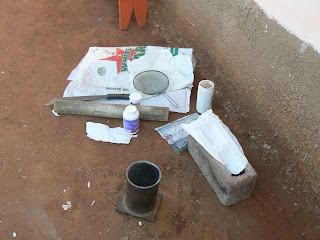 We were invited in to see his collection of herbs and healing magics. Quite abruptly he reached for a bottle, opened the top and took a tiny amount of liquid putting it on Doug's arm. Within a few seconds Doug could feel a sting. They called this an injection medicine. It allows the herbs to go into the skin. Doug was surprised and it was not comfortable. Did this medicine man see something in Doug that needed healing? Was this a magic potion just for him? We do not know. 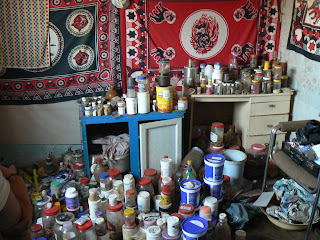 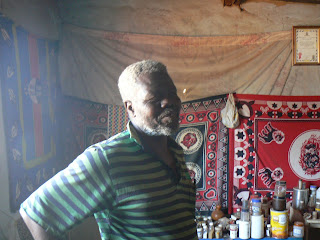 Next we were invited to have the Zulu beer. We had heard of it but when it was offered to all sip from the same cup, rather pitcher, we declined. But then, we had another chance at our Zulu lunch. At the beginning of our tour we first stopped in Durban at an open market where the people in all areas  go to shop. We were each given a task to buy vegetables for our lunch. They traveled with us to the village and then were given to a woman who cooked for us while we were meeting the Head Man and the Healer. 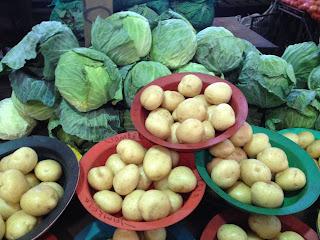 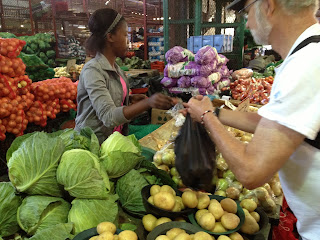 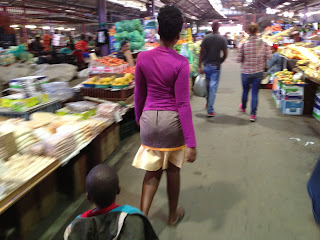 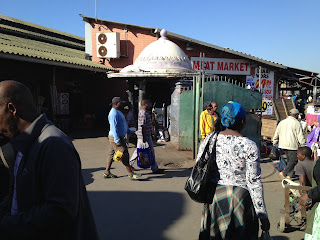 Our meal was vegetarian with potatoes, cabbage, sauted "spinach" (chard, greens), a tomato and potato dish and a traditional ground corn porridge. The flavors were delicious. Anna thought it was the best food that she had in South Africa. Maybe it was. We then got another chance to try the beer. Well, it was definitely not a favorite. 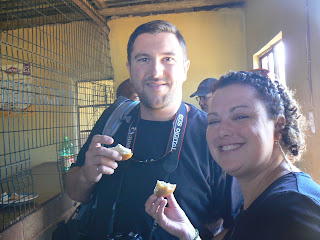 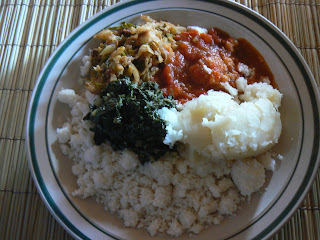 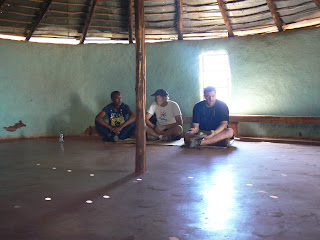 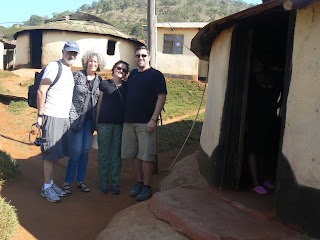 I was impressed with the simple nature of living in this village. Besides being poor, no riches and only the most rock bottom basics, the life seemed to have a high quality of life to it. There was a social order, kindness, children in school, shelter and food. But, the Head man's second wife did admire Anna's shoes and pointed to her own. Her toes were showing through.

I think Anna wished that she had another pair to give her. We learned that it is OK to gift them things. Sorry that we did not know that before or we would have brought gifts. 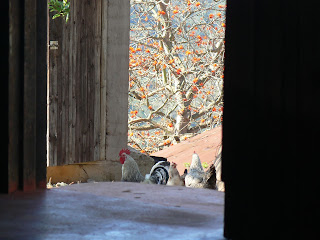 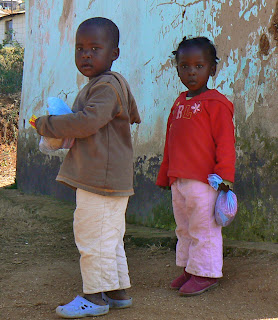 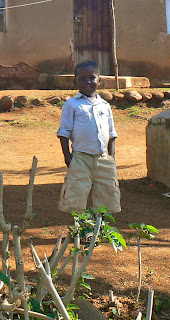 Leaving the village we looked over beaded wares and then were able to find a spectacular overlook that viewed the thousand hills. 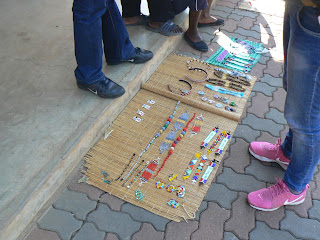 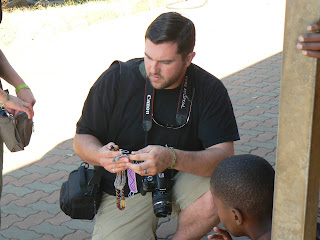 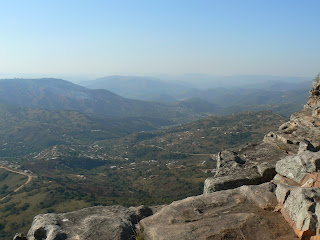 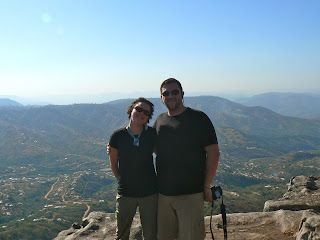 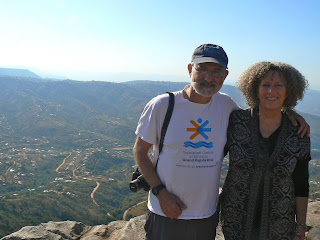 Very Interesting....Learning about Africa in ways I never thought I would.

Tomorrow, the closing ceremonies and the gala dinner.....
And then, we are coming home!